Bienestar en tu Embarazo (Wellness in Your Pregnancy) is a series of workshops for young pregnant women facing adversity. The program aims to reduce toxic stress during pregnancy by helping women practice stress-reduction and emotion management techniques, teaching them strategies for bonding with their baby prenatally, and providing them with opportunities to strengthen their relationship with their own mother in order to build a supportive and nurturing caregiving partnership for when the baby is born.

This project is part of the first cohort of the Aceleradora de Innovación para la Primera Infancia, FOI’s innovation cluster in Mexico. To date, the project team has conducted three main feasibility tests and one pilot study. Data was collected before and after program participation in the community health clinic where the program was implemented. Trained program staff collected data using a combination of program-specific questionnaires and standardized scales. The population Bienestar en tu Embarazo intended to serve was pregnant women facing adversity, including adolescents. The pilot study participants included pregnant women between the ages of 15 and 34, with a mean age of 23 years. The majority of the women served reported a low household income of less than MX$90,000 per year, low educational attainment (less than a high school diploma), and lack of full-time employment. Though not specifically recruited by the program, 11% of the women self-identified as indigenous. Overall, the sample served aligned with the population the program intended to serve. Forming a partnership with a community health clinic that was already serving this population and offering the program in that setting was key to reaching this population.

The Bienestar en tu Embarazo team found strong preliminary evidence of change for one program target (frequency of prenatal intentional communication with the baby) and one program outcome (self-regulation). The strength of the preliminary evidence of change for the rest of the program targets and outcomes investigated was considered to be moderate and requires further investigation. The team is considering refining the strategies that are associated with these targets and outcomes with the goal of increasing their impact, as well as measuring them in more systematic ways. Preliminary evidence suggests that participants who reported higher levels of adverse childhood experiences and those who did not plan their pregnancy benefitted more from the program, indicating that these might be moderators of program impact.

In the graphic below, hover over each of the targets, outcomes, and moderators to get more in-depth information about Bienestar en tu Embarazo’s theory of change. 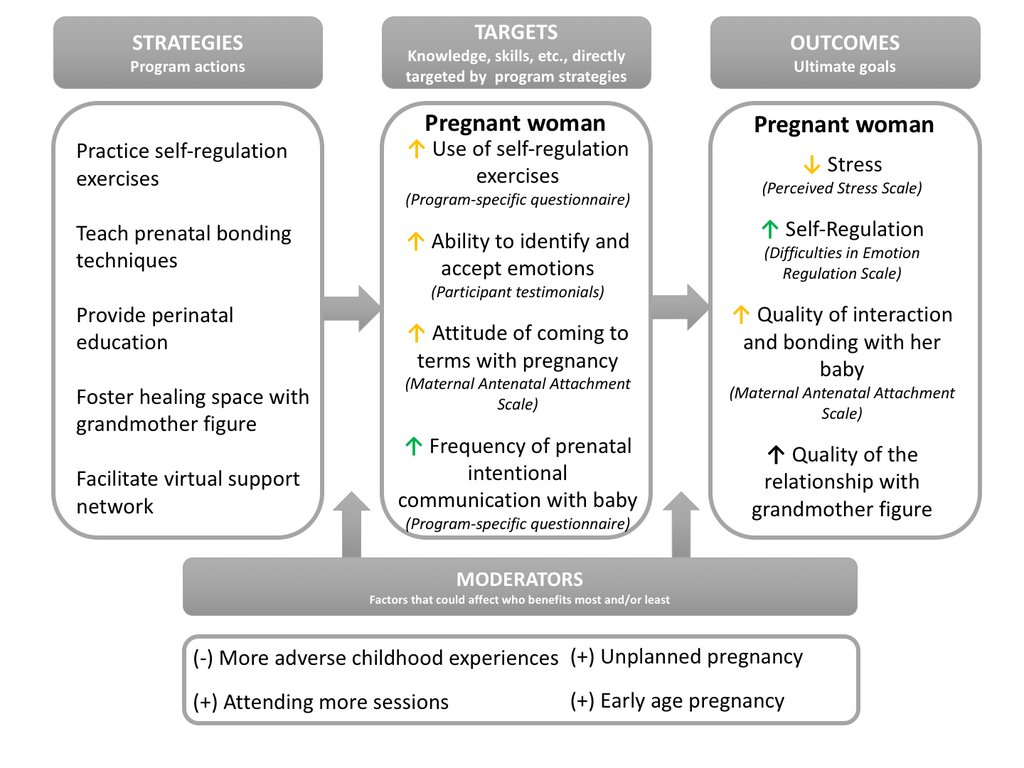 The team considered multiple sources of information in determining the strength of the evidence of change observed. These included measures of the statistical significance (e.g., p-value) and magnitude (e.g., effect size) of change on average, as well as the pattern of change for individual participants. To maximize learning, quantitative evidence was supplemented by “practice-based evidence,” such as participant testimonials and informal observations, to inform the interpretation of quantitative data patterns. Given the small size of the sample, findings are considered preliminary and should be interpreted with caution.

The development of program materials focused on the content for each session of the program, as well as on creating materials to be distributed to participants. The program materials content was adapted based on feedback obtained from participants during the feasibility tests. This fast-cycle iteration process led to program materials that were more accessible and engaging for program participants. The Bienestar en tu Embarazo team also developed an implementation guide to train new program facilitators. This led to important insights about the level of detail that needs to be documented in order for others to learn how to implement the program effectively. These lessons learned will inform adaptations to the implementation guide and other training materials moving forward.